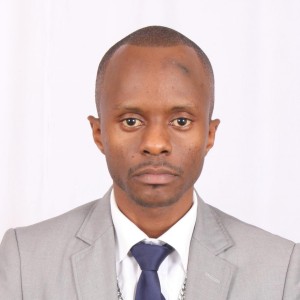 Nairobi, 20 June 2019 – There is a bright new playspace overlooking the Mulago Kubwa football pitch in the informal settlement of Mathare in Nairobi. The wooden pavilion, a tall open structure with wooden floors, timber beams, and a roof has been renamed ‘The Children’s Corner.’

And today about 60 young children were there to mark the opening of the play area.

“Actually it’s been here about a week already,” said Isaac Mutisya Muasa, a Youth Coordinator from the area. As he speaks children cartwheel and dance on the flat, wooden floor behind him. “Already school groups have been using it as a place to teach children to sing and play.” 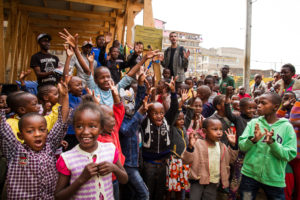 UN-Habitat partnered with the Embassy of Sweden in Nairobi and ARVET, an engineering firm from Sweden, to build the model pavilion promoting the use of sustainability harvested wood for last month’s UN-Habitat Assembly in Nairobi.

“We couldn’t ship the version we were going to showcase, from recycled Swedish wood. So we visited woodworking shops in Nairobi to source the local timber and managed to build this in time for the opening of the Assembly,” explains Ivan Segato, the Architect from ARVET,

Once the week-long UN-Habitat Assembly was over, the idea was floated to give the building to the Mathare community youth group to be used as a safe and fun space for children and their families to come together play and interact.

“This is the role of architecture,” smiles Segato, “It’s a spacial answer to a human need. Here in Mathare I understand there is a strong need for free space, and it’s great the community can use this space as they see fit.” 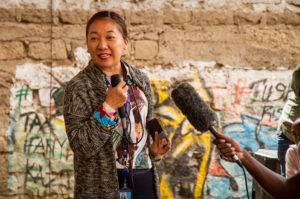 “We need more spaces like this in communities like this,” emphasizes Kazumi Ogawa, UN-Habitat Chief of Staff. “Spaces where children and their families can have a safe space to hang out, and maybe have a few parties!”

The Children’s Corner, hosted by the Mathare Environmental Conservation Youth Group, is in Mulago Kubwa, in Mathare.

As the music starts up and the dancing begins the Master of Ceremonies, Gerry Lumumba, yells over the microphone in Swahili, “This is your space. It’s the Children’s Corner!” The young children cheer loudly and start dancing. He encourages them concluding, “So anytime you want, or anytime you feel shy, you can come here and play, because it’s your space!”

Public spaces for children and youth play a vital role in ensuring their overall wellbeing in the cities and communities especially in the most marginalized areas. UN-Habitat’s Global Public Space Programme and its Youth Empowerment Program aim to improve the quality of public spaces worldwide. Public spaces are sites which are accessible to all and include parks, streets, pavements, markets and playgrounds. Good public spaces enhance community cohesion and promote health, happiness, and well-being for all citizens.

Reposted from UNHabitat.org website 19 January 2021 – As soon as the first COVID-19 cases were discovered in Kenya in March last year, UN-Habitat turned to the youth-led groups in informal settlements and slums to partner on the response. By International Youth Day on 21 August, over 2.5 million handwashes had been done at the

Launch of Consultation on Youth, Cities and COVID-19 Policy Brief

The impact of COVID-19 has intensified the pre-existing challenges faced by young people in their day to day lives. Ranging from unemployment to lack of access of resources and services, there has been an increasing need for policies that will urgently address these issues. Because of this UN-Habitat has developed a Policy Brief on Youth,

Nairobi, 26 August 2020—Kenyan football star Victor Wanyama has partnered with UN-Habitat to provide face masks to inhabitants of two of Nairobi’s informal settlements to protect them against COVID-19. So far, some 7000 masks have been distributed. Through the partnership, the Foundation of the Kenyan born footballer Victor Wanyama and UN-Habitat agreed to support communities

The newly formed Youth-led COVID-19 Emergency Response Coalition has launched call to action while at the same time announcing its 1,500,000 hand washes as part of its #KomeshaCorona campaign to stop the spread of the corona virus in the informal settlements and towns of Kenya. “We are proud to announce this milestone,” states Coalition spokesman

Kenya: Young people mobilize to prevent the spread of COVID-19

Friday, 12 June 2020 | Nairobi | UN-Habitat | Doug Ragan | https://iseek.un.org/article/kenya-young-people-mobilize-prevent-spread-covid-19 Youth groups in Mathare, one of Kenya’s largest slums, have banded together to protect their communities from the spread of COVID-19. The facilities they have put up have resulted in over 420,000 handwashes. The residents of Mathare, and the other one billion